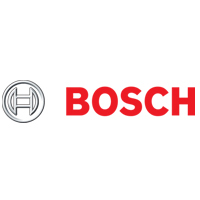 Bosch is the largest auto parts supplier worldwide. With 410,000 global associates, the leading car parts supplier is active across 60 countries and manufactures in 130 engineering locations. Bosch's state-of-the-art lights and long-life wiper blades are amongst the most popular in its expansive auto parts range, which is designed to make driving safer and more eco-friendly.

As a highly technological manufacturer, Bosch is renowned for smart mobility solutions. The company is heavily involved in the transition towards automated driving and is currently crafting both tech-savvy automated systems and a forward-thinking system to alert wrong-way drivers.

1886: was established when Robert Bosch founded the Workshop for Precision Mechanics and Electrical Engineering in Stuttgart.

1897: began to install magneto ignition devices, becoming the only supplier of reliable ignition.

1903: achieved success when Camille Jenatzy drove a Mercedes with a Bosch ignition system to victory in the Gordon Bennett Cup.

1906: advertised its magneto ignition systems in US newspapers, generating orders worth $1M and doubling sales within 1 year.

1914: lost half of the workforce to military service during World War I. Women took over the manufacturing, creating grenade detonators instead of magneto ignitions. 453 associates never returned from the war.

1926: began to manufacture automotive features following the war, including wipers and horns.

1942: lost Robert Bosch to World War II. The group lost its international sites for the second time during the war.

1945: began to manufacture spark plugs for the Allies’ military vehicles.

1959: began to develop the Jetronic, an electrically controlled gasoline injection system that met strict Californian environmental regulations and went into mass production in 1967.